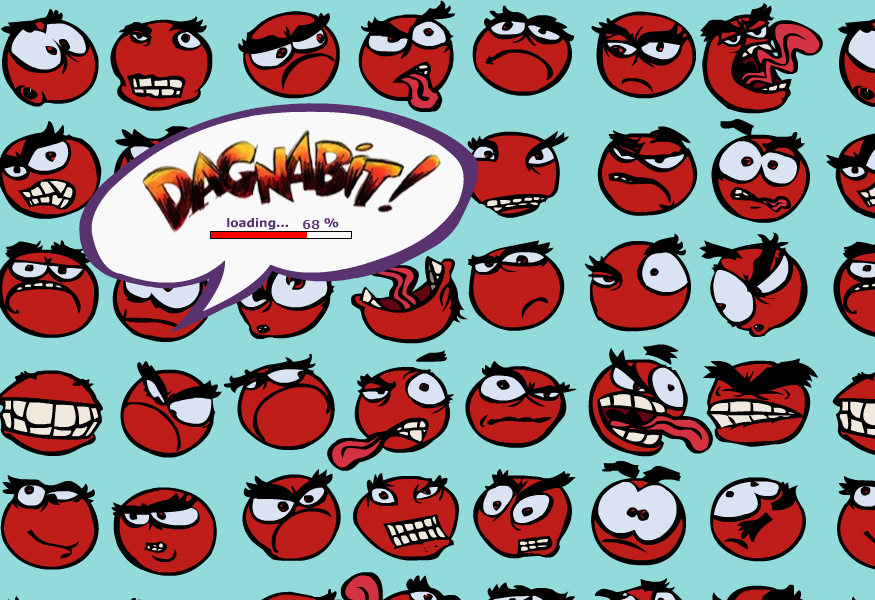 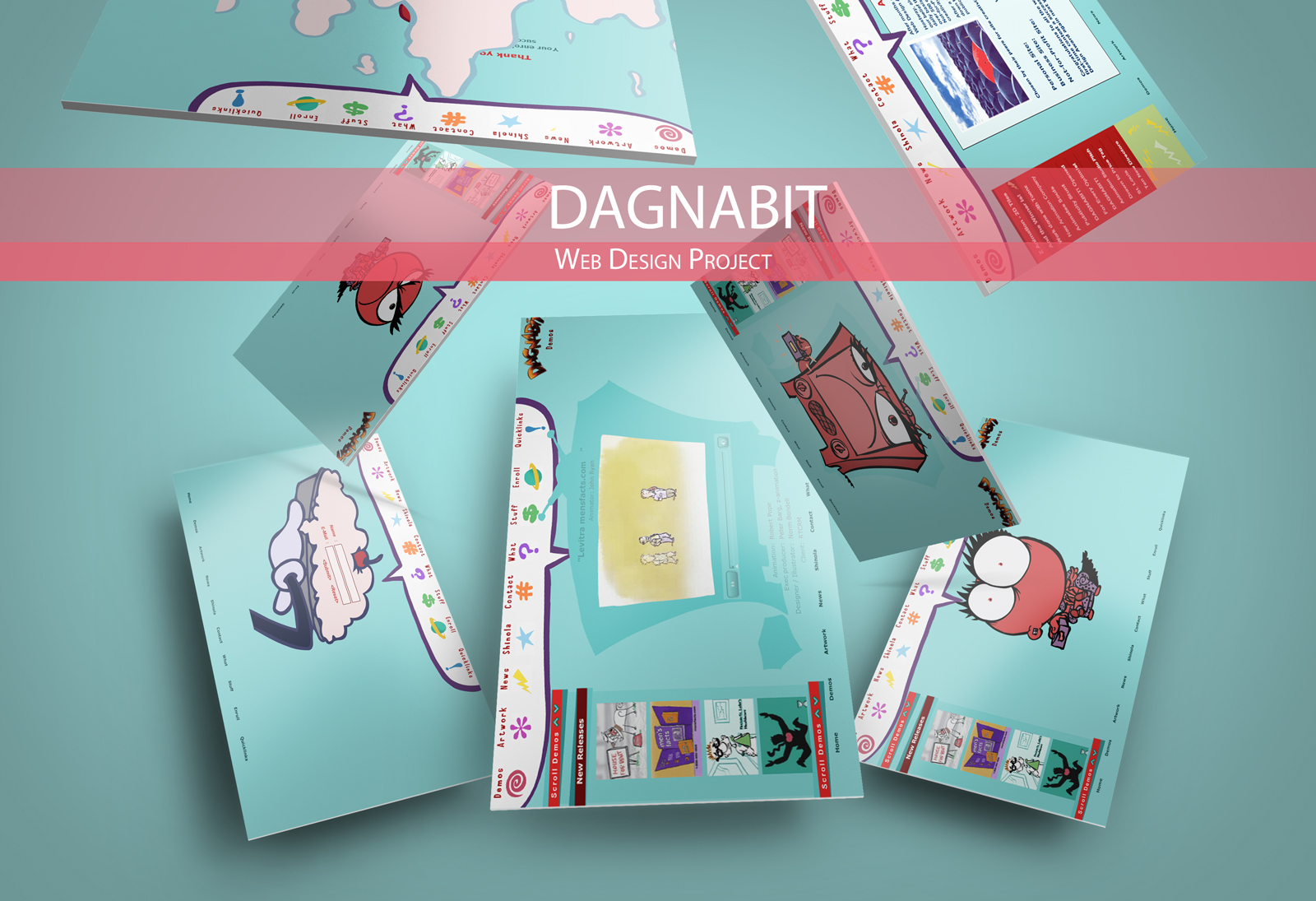 A coding pleasure that WON FIRST PRIZE for BEST BUSINESS WEB SITE from WIRED Magazine. The Dagnabit web site was my introduction to Flash, and ActionScript. Before DAGNABIT I had not used Flash. I had no idea at the time that the web site would be considered, let alone win the Best Business Web Site award from WIRED.

The web site houses a large collection of work. From complex storyboards, animation samples, video reels, and stills (lots of stills). Everything for the DAGNABIT website is custom built. I wrote all the ActionScript. The web site has a treasure of hidden features, or events. 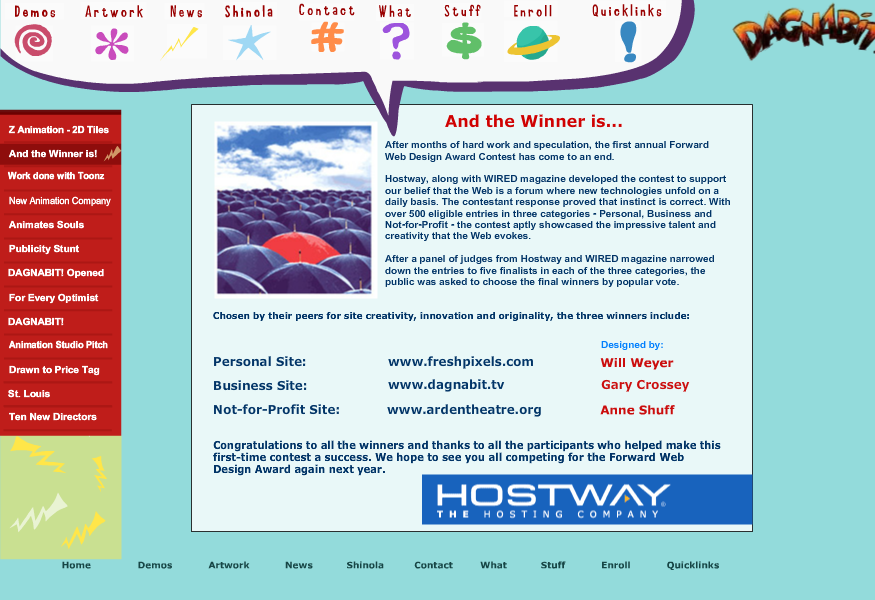 The DAGNABIT Animation web site is huge... and has every bell and whistle I could think to add. WIRED magazine liked my preloaders coding. The preloaders all have a visual feedback. The video section morphing preloader, is the web site feature that most impressed the WIRED judges.

The Video Gallery is user friendly. The viewer is greeted with the animated Dagnabit character popping a remote control. My client is an animator - that does great work. I wanted the Dagnabit web site to have an animated interface.Once a video is selected, that animation begins. The Dagnabit character morphs into a TV set - and the video begins to play. The morphing animation is the video preloader. The overall effect is quite amazing and seamless. 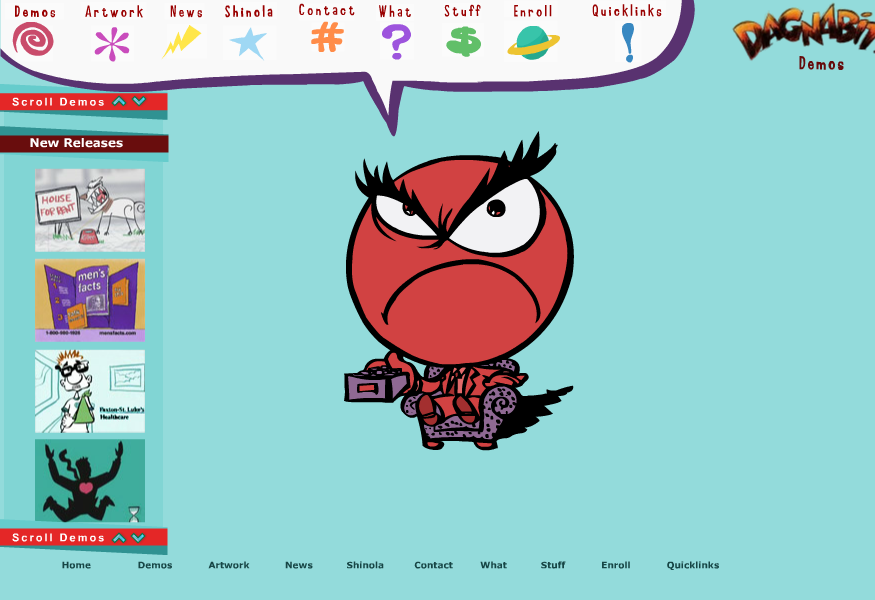 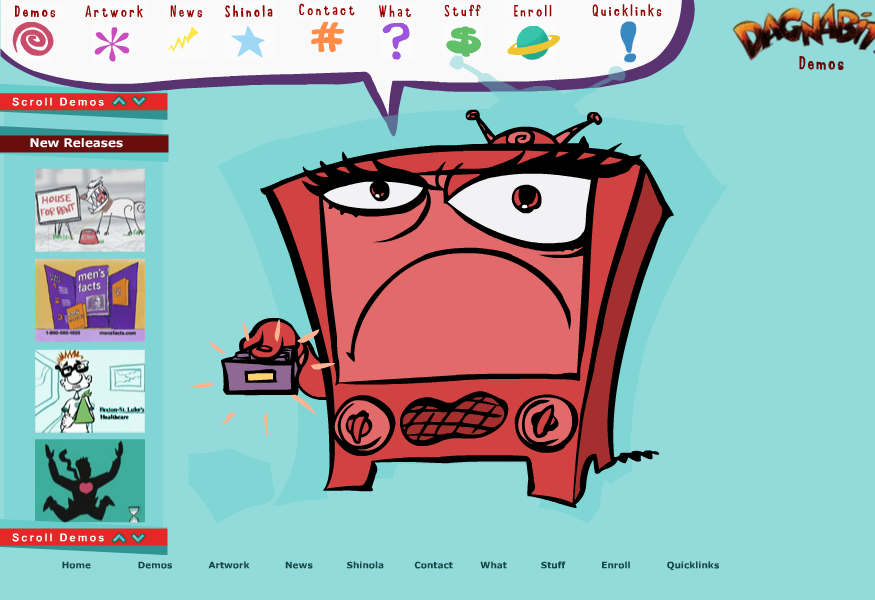 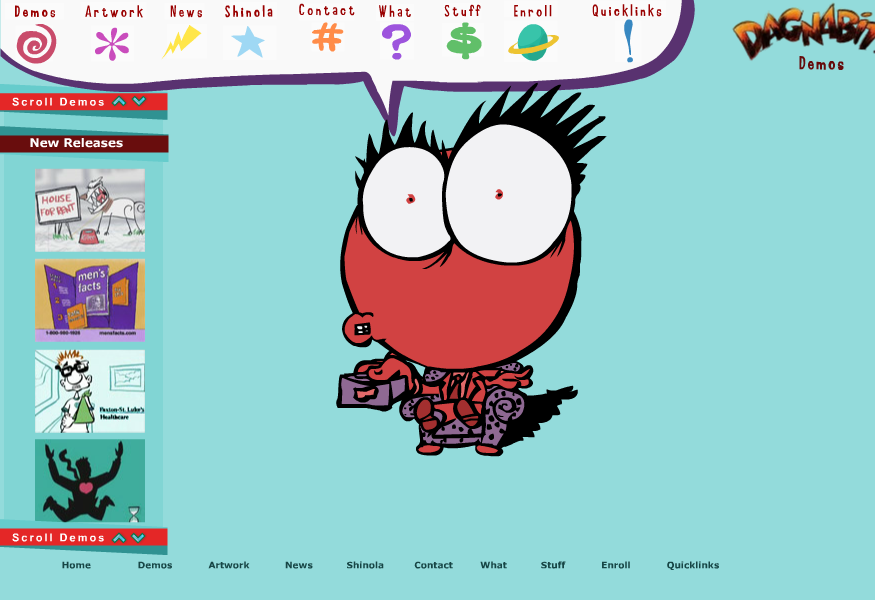 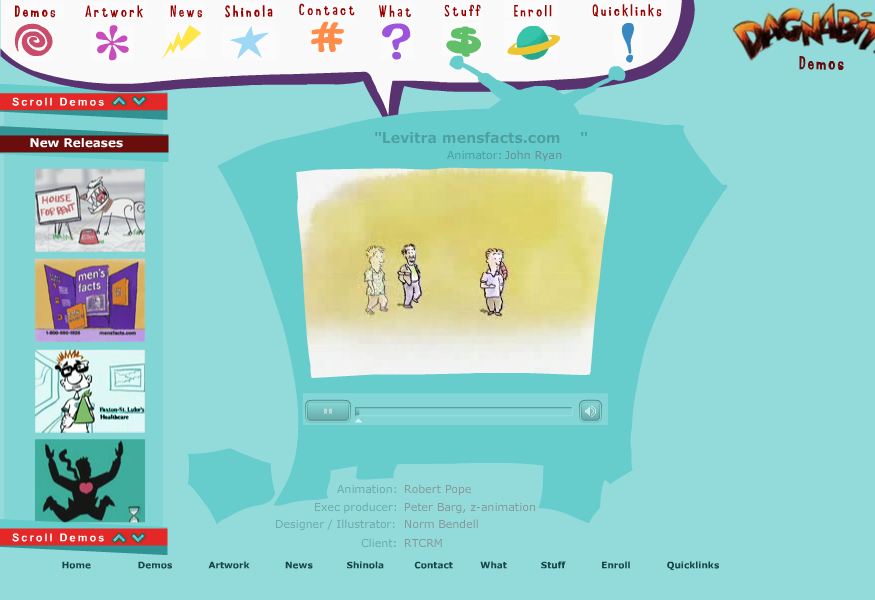 The enrollment page, is one of the pages that I loved creating. Upon submitting the form, the Cream Pie animates to a Pie in the Face. With cream sliding down the screen. John Ryan created the animation that I then programmed to load upon command. 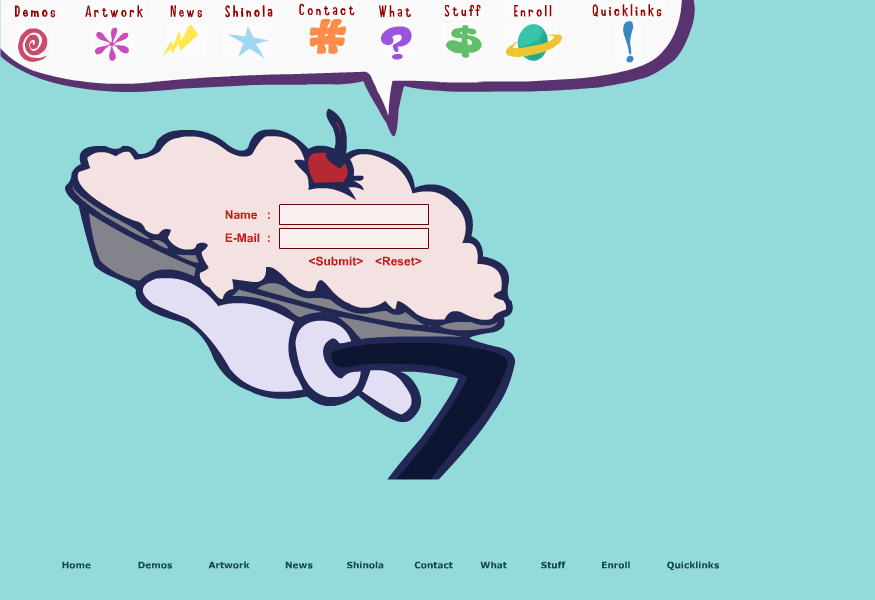 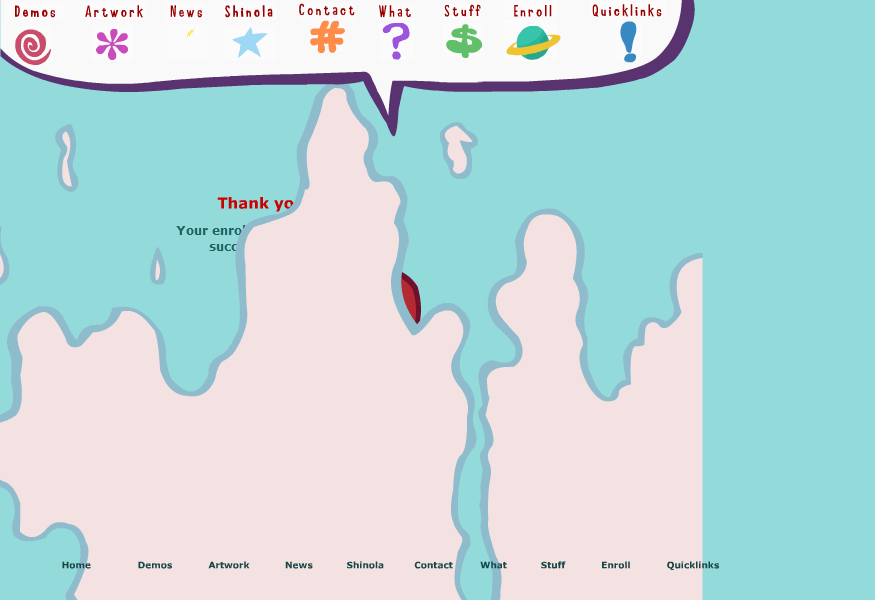 The Dropping The Baby on the head is also kind of fun to play with. I created the short animation effect of Robert being dropped on his head as a baby (along with sound effects). The Dropping the Baby animation is a wonderful time waster (that most everyone enjoys doing). 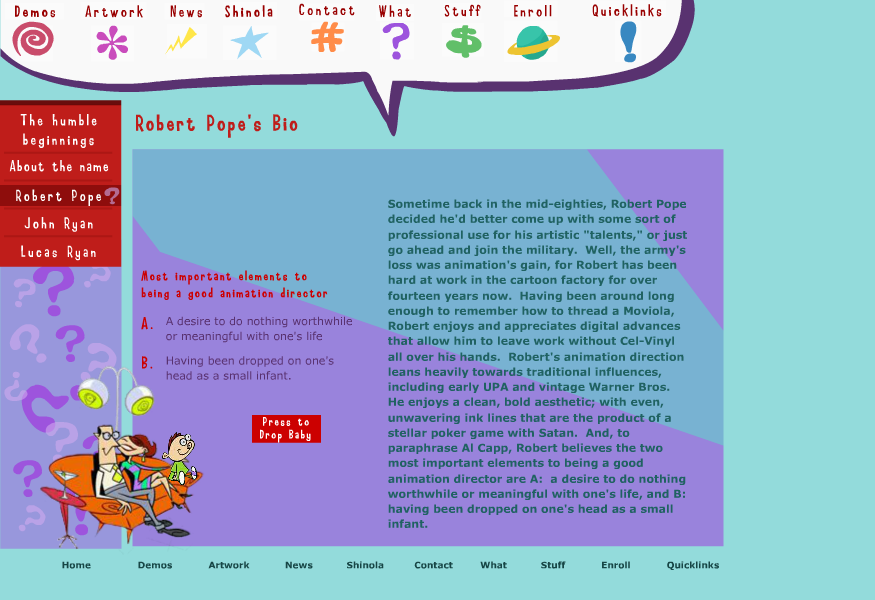 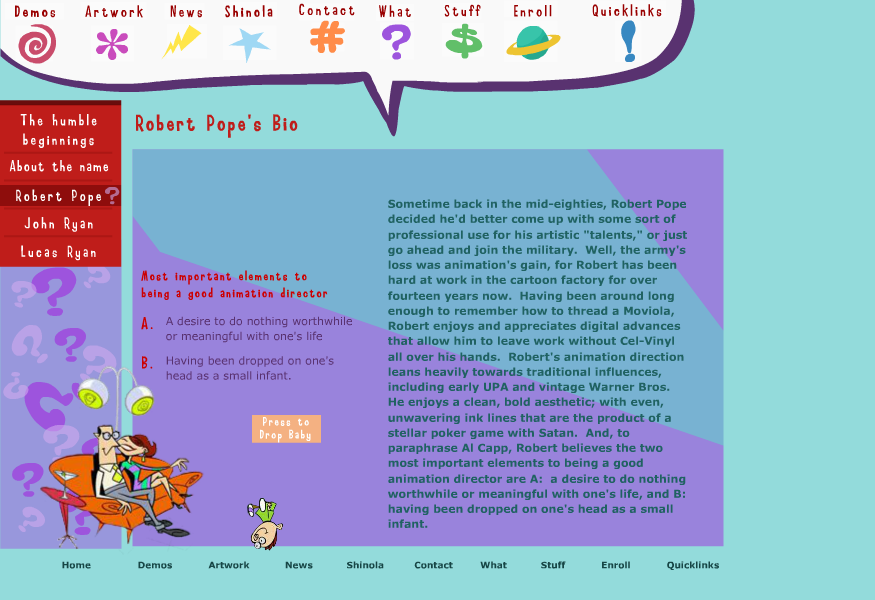 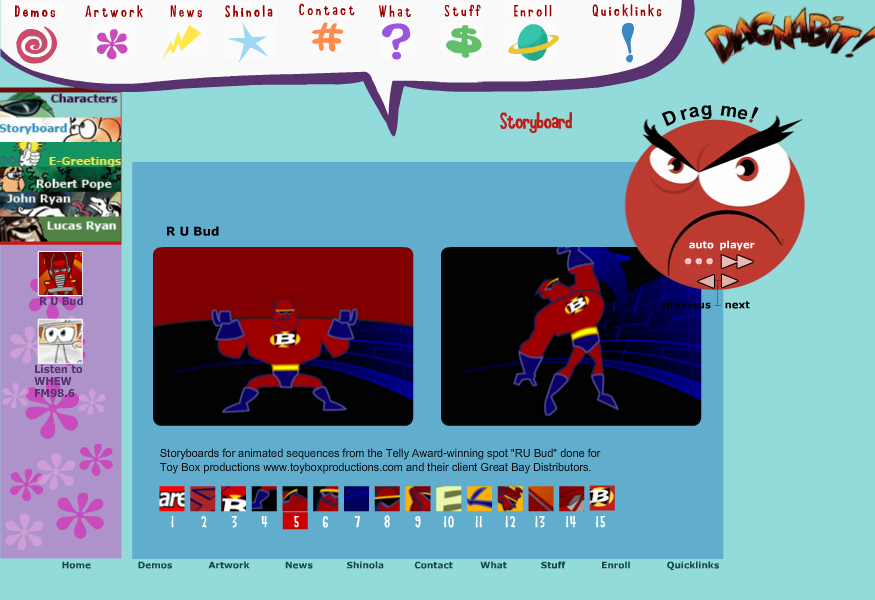 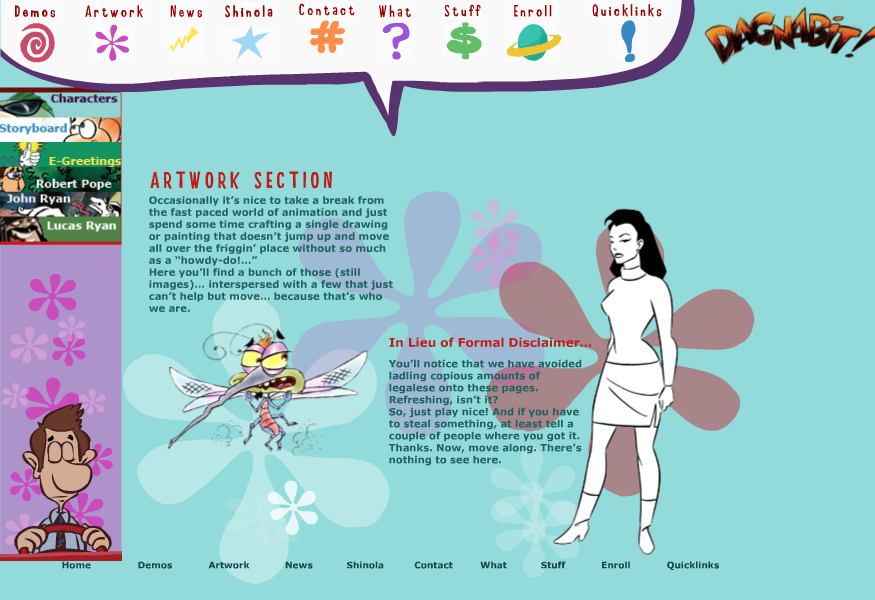 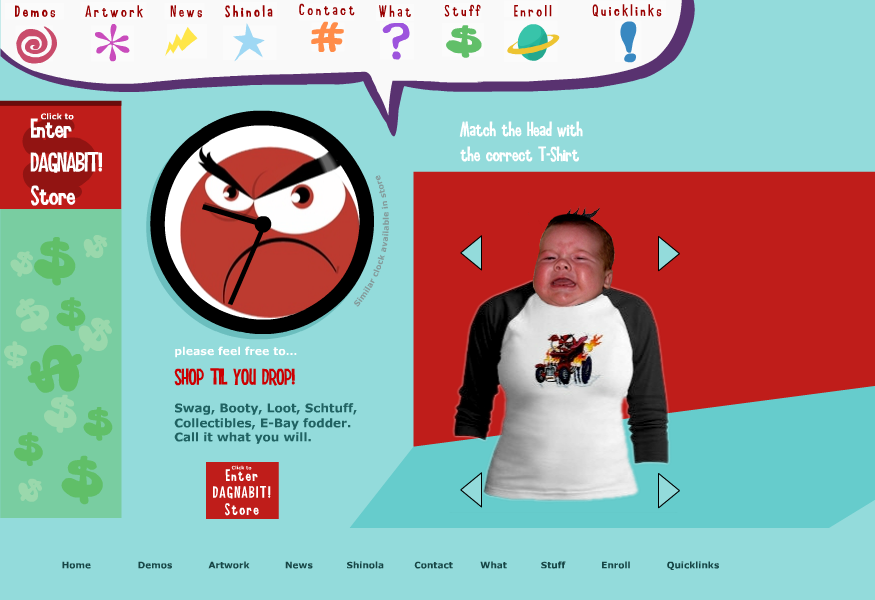 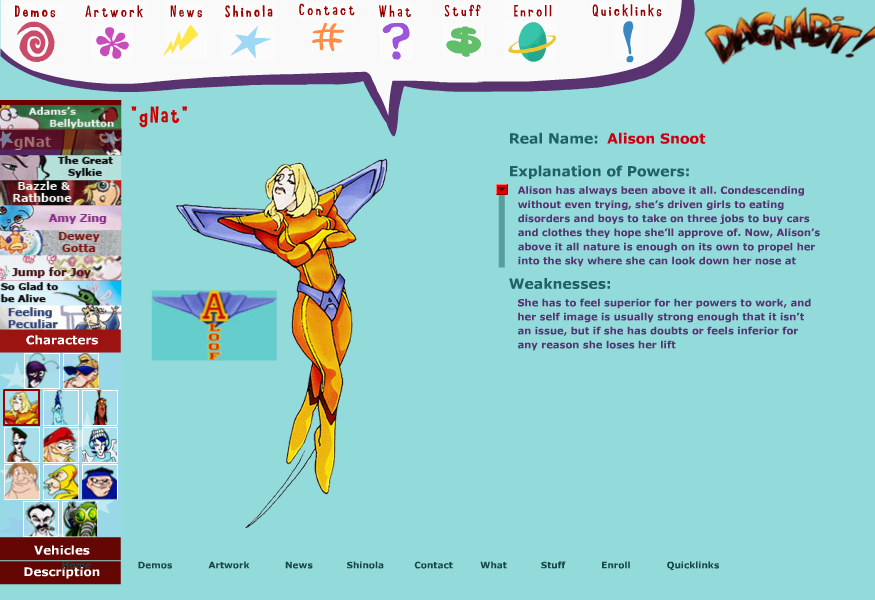 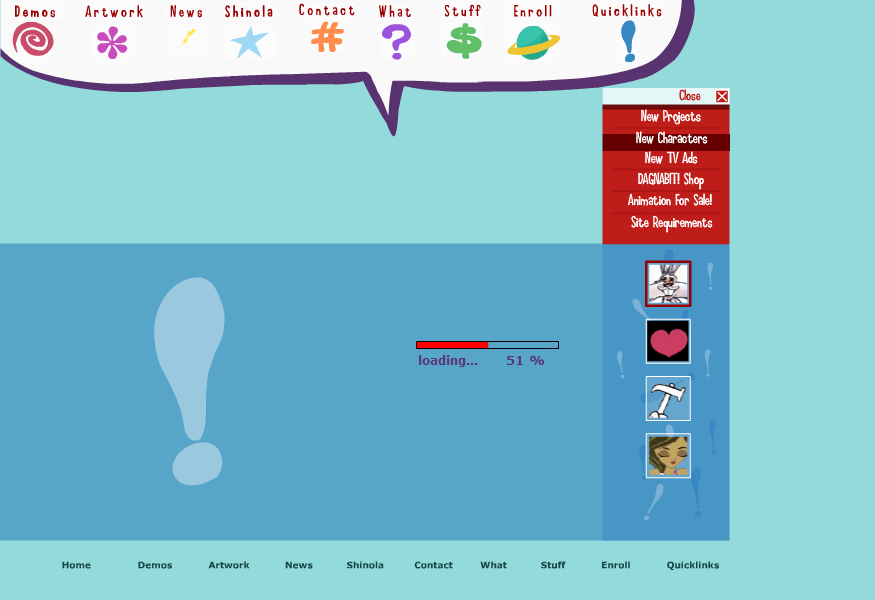 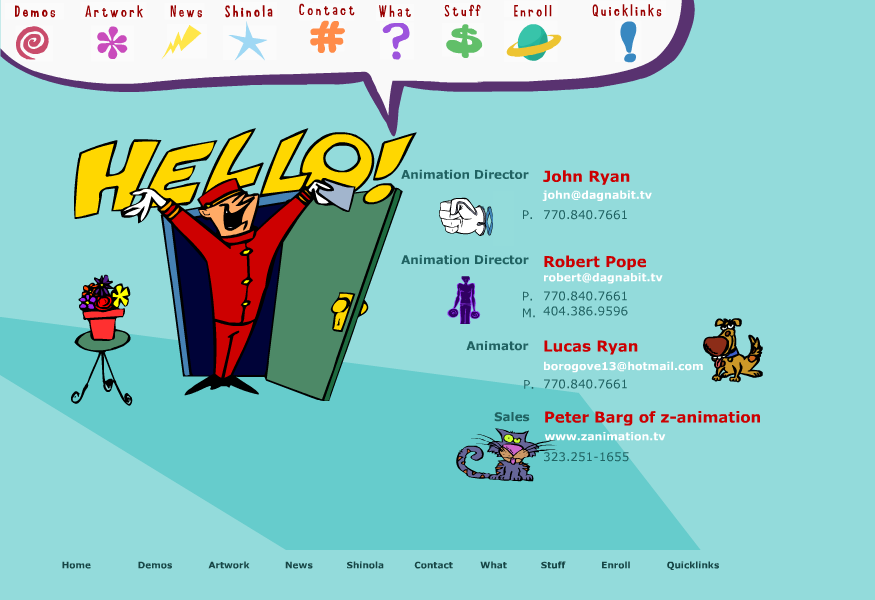 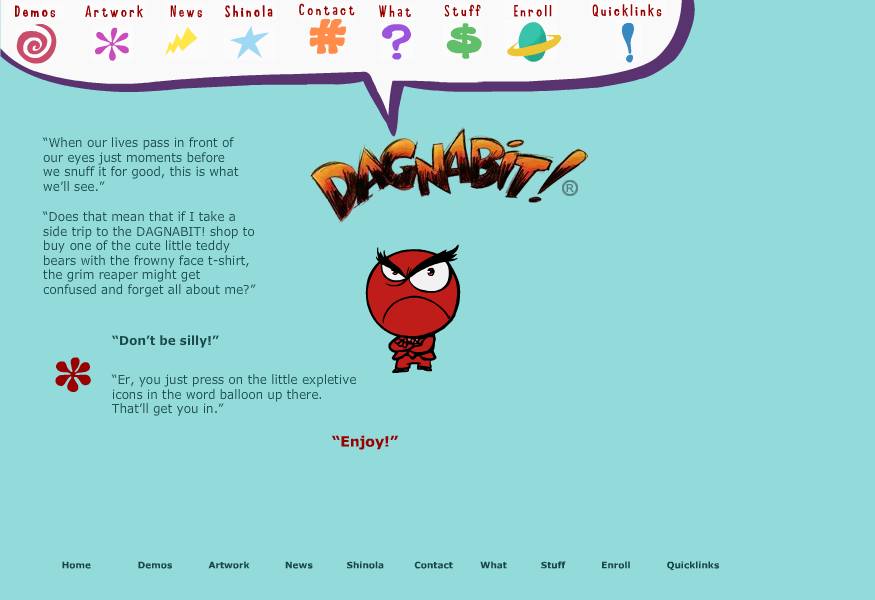 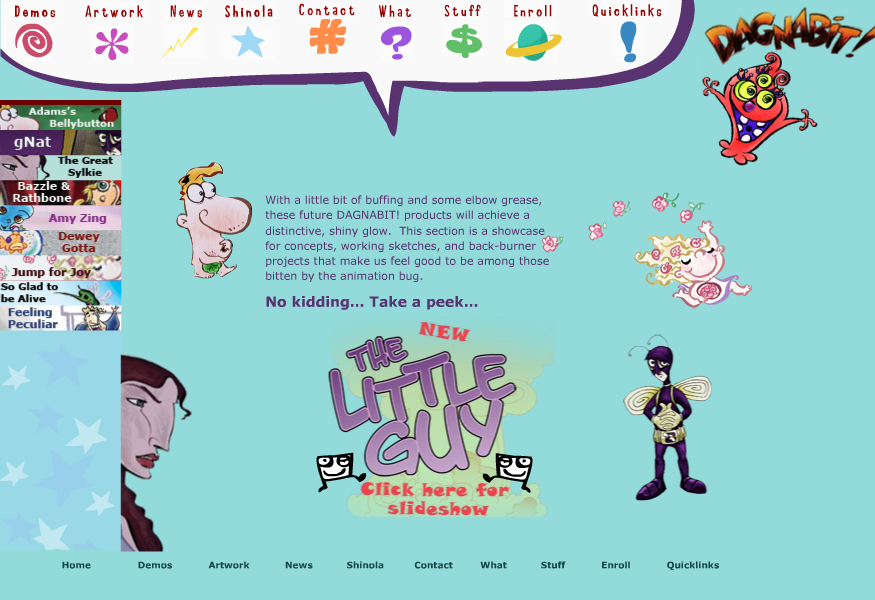 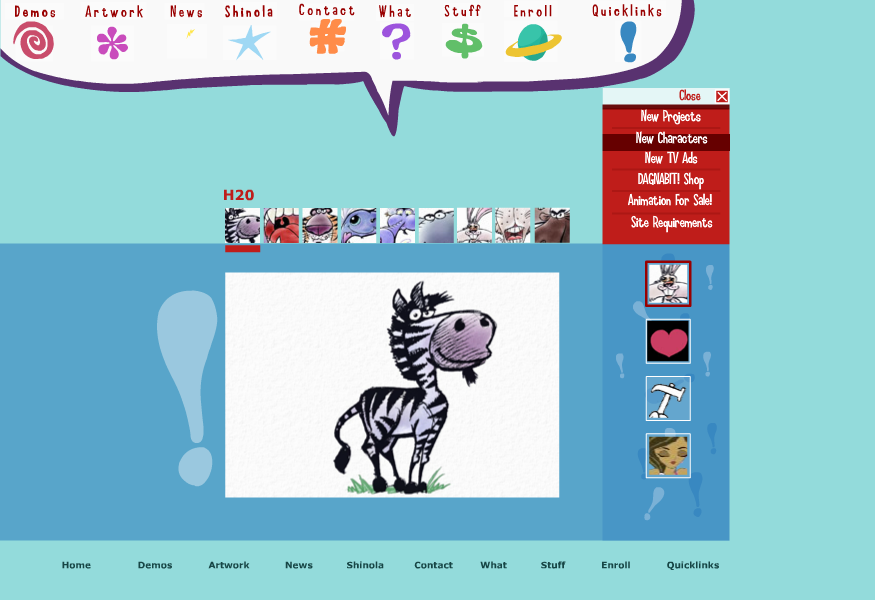 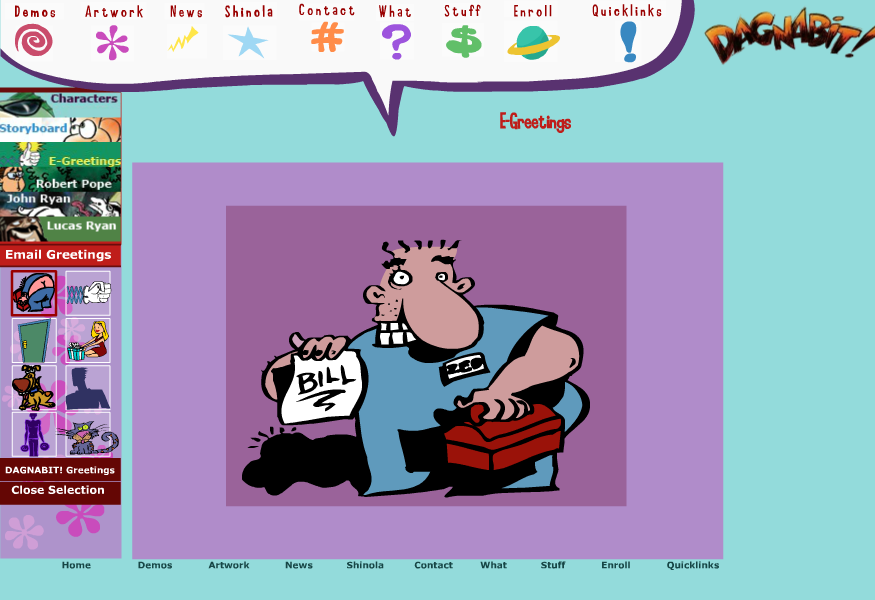 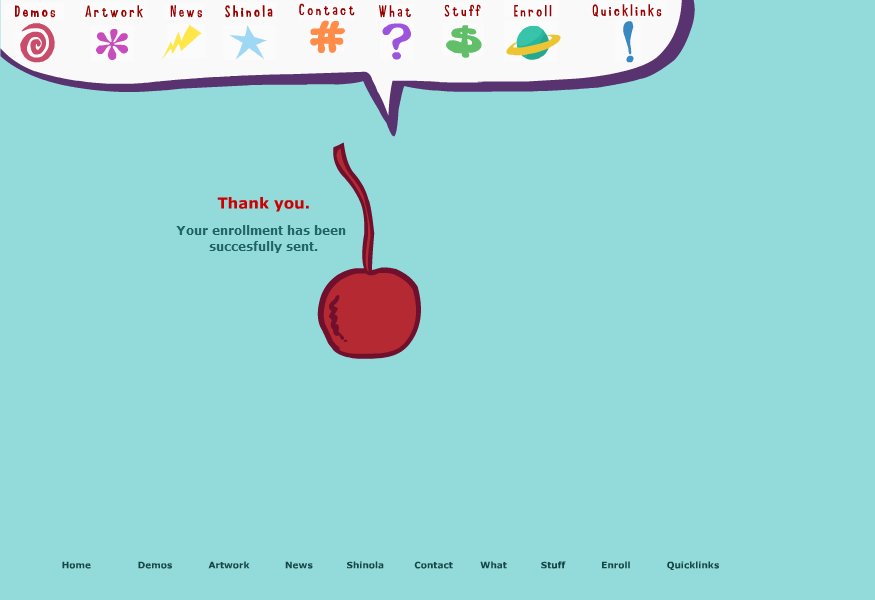